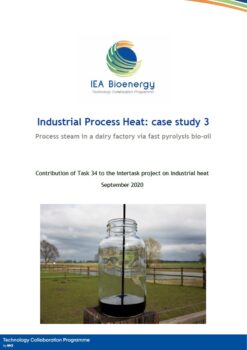 Fast pyrolysis is a process in which organic materials are heated rapidly to 450 – 600 °C in the absence of air. Under these conditions, organic vapours, non-condensable gases (NCG) and char are produced (‘thermal depolymerisation’). The vapours are then condensed to a liquid called Fast Pyrolyis Bio Oil (FPBO). Typically, 50-75 wt% of the dry biomass can be converted to FPBO. The char and NCGs are used to generate steam and produce electricity, partly for internal use, partly available for external use/export.

The case study concerns the use of the fast pyrolysis oil produced by Empyro in the industrial size steam boiler of FrieslandCampina (FC). A new natural gas fired boiler was designed and constructed for FrieslandCampina suitable to co-fire pyrolysis oil. In the boiler, process steam is produced (40 t/hr at 20 bar) for the milk powder drying process. The boiler normally operates with 70 % of pyrolysis oil and 30 % natural gas (heating value basis), but 100% back-up of natural gas is always available guaranteeing continuous steam supply to the core processes of FrieslandCampina. The FPBO is transported from Empyro (Hengelo) to FrieslandCampina (Borculo) by tank truck, a distance of about 30 km. An on-site small storage facility of about 100 m3 is available. The boiler has been commissioned late 2015 and –to date- the use of FPBO has saved the company about 30 million m3 of natural gas and reduced their CO2 emissions with some 60,000 ton. This case study report will describe the application, design and operation of the boiler in more detail.