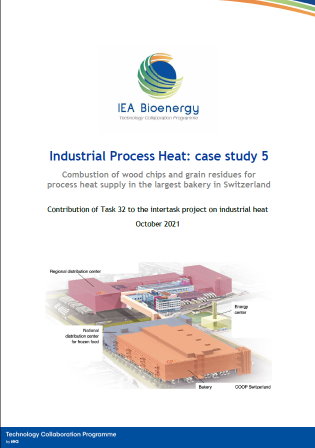 The Coop Group is Switzerland’s largest retail and Europe’s second largest wholesale company with a workforce of around 85 000 in total and 54 000 in Switzerland. In 2015, Coop built a new production and distribution center in Schafisheim in the Swiss midlands with a total investment of more than Euro 500 million and 1 900 employees on the site. The existing buildings were extended by a new building measuring 185 x 100 m in size and 58 m in height, of which roughly 50 % is below ground level in a former gravel pit. The building complex incorporates a high-bay freezer warehouse and Switzerland’s largest bakery and confectioner with an annual production of 60 000 tons of baked goods.

In order to substitute fossil fuels, an energy production based on a biomass combustion plant was realized to provide process heat for the bakery by thermal oil. Since the production of the raw materials for the bakery causes residues in the up-stream milling process, the vision to use milling residues as energy for the bakery arose. The potential and technical opportunities were evaluated and a concept of co-firing wood chips and grain residues developed. Swissmill, the largest mill of Switzerland located in Zurich and owned by Coop, was involved to provide fractions of grain residues, which are of low value for other purposes. To ascertain a flexible operation of the bakery, the decision was taken to implement a concept which enables a variable energy production by 50 % wood chips and 50 % grain residues with the opportunity to switch to 100 % wood chips. Consequently, a combustion system was designed, that enables the use of forestry wood chips from a respective silo with addition of pellets from grain residues from a separate storage compartment. The thermal oil boiler and the flue gas cleaning were adopted to comply with the challenges of increased slagging and fouling and with increased NOX emissions due to the high ash and nitrogen content of grain residues. To cover the rapid load changes of the bakery process, a gas fired peak boiler complements the heat production.

CS5_T32_Biomass combustion for process heat in a bakery